Dragonflies aren't really dragons, and they aren't really flies, either! How much do you know about these pond-dwelling creatures? Learn all about the history of the dragonfly, its remarkable anatomy, the stages of its life cycle, and more. 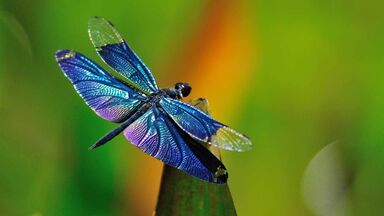 When you see a dragonfly, you're looking at one of the oldest creatures on Earth! But how did these sticklike bugs get their name, and what did they used to look like?

Dragonflies Are Older Than Dinosaurs

The earliest dinosaur fossils date back 240 million years. But can you believe that dragonfly fossils have been found to be even older than that? Paleontologists place the earliest known dragonflies more than 300 million years ago, long before dinosaurs ruled the Earth.

Prehistoric Dragonflies Were as Big as Crows

The dragonflies of the prehistoric era weren't only old — they were enormous! Some dragonfly fossils have a 30-inch wingspan, which is about as big as a modern crow. Today, the largest dragonflies (Petalura ingentissima) have a 6.3-inch wingspan and are found in Australia.

Dragonflies Were Named for the Devil's Horse

Dragonflies don't really look like dragons, so how did they get their name? The answer comes from Romanian folklore and the story of St. George. In the myth, the Devil turned St. George's horse into a huge insect. That earned dragonflies the Romanian name for "Devil's Horse." Since the Romanian word drac means both "Devil" and "dragon," the insect soon became "dragonfly."

There Are More Than 5,000 Species of Dragonflies Today

Dragonflies and houseflies are both flying insects with six legs and a thorax, but that's where the similarities stop. They're not even in the same family! Learn more about dragonflies and the unique way they're built for navigating their environment.

Dragonflies Don't Have Teeth, But They Can Bite

Despite their place in the order Odonata, which means “toothed,” dragonflies don’t have teeth. Like other insects, they have sharp mandibles on their jaw used for tearing and eating prey. Their bite isn’t dangerous for humans, but it can definitely pinch!

Dragonflies have two giant eyes that contain nearly 30,000 lenses called ommatidia. Their eyes are so big that they cover the dragonfly's entire head, allowing it to see 360 degrees around — perfect for a creature that tends to be both predator and prey.

They Can Reach Speeds of 35 Miles Per Hour

Dragonflies are the fastest flying insect in the world. Some large species of dragonflies can reach speeds of 35 miles per hour, which is even faster than the average hummingbird!

They Beat Their Wings Almost 10 Times Slower Than Bees

Dragonflies Can Fly Backward, Loop the Loop and Hover in Place

Because dragonflies have a unique two-wing design, they are incredibly aerodynamic. Dragonflies can fly in any direction that a helicopter can fly, including 360 degree turns, hovering in one place and even backward.

If you put a dragonfly wing under a microscope, you'd see billions of tiny nanostructures. These "fingers" are small enough to grab bacteria and hold on tight. As the bacteria try to escape, they tear themselves apart, keeping the dragonfly safe and healthy (and an inspiration to microbiologists everywhere).

Depending on the species, a dragonfly can live for a few months or even a few years. They transition through a process called incomplete metamorphosis. But what does this process look like, and how does it prepare them for life on the pond?

Dragonflies Live Most of Their Lives as Larvae

Dragonflies aren't born to fly. In fact, they're born to swim! Dragonflies lay their eggs in still water. The eggs hatch shortly after, and dragonfly larvae (known as nymphs) emerge as aquatic creatures. These nymphs may spend up to four years in the water before the next stage of their life cycle.

As nymphs, dragonflies learn to be prolific hunters. Nymphs eat any aquatic creatures they can handle, which include mosquito larvae, worms and tadpoles. As they get bigger, small fish can even become part of their diet.

Adult Dragonflies Burst Out of Their Larval Skin

During the course of their nymph stage, dragonflies molt up to 12 times as they grow. Their final molt takes place out of the water. Unlike butterflies and moths, who use this time to transition to the pupal stage, dragonflies progress straight from larva to fully grown adults. The nymph's skin splits open and the adult dragonfly body emerges. After a short rest, it's ready to fly!

Dragonflies are an essential part of their freshwater ecosystems. Squarely in the middle of the food chain, they both regulate the populations of smaller insects and provide important sustenance to predators.

Adult Dragonflies Can Eat While Flying

Dragonflies typically hunt and eat in midair. They can catch any insect (they're not picky about the type) by creating a snare with their legs or by simply plucking it out of the air with their jaws. They eat their prey quickly and move on to the next hunt. Larger dragonflies can even eat their own body weight in a day.

Dragonflies Are Better Hunters Than Lions or Sharks

When you think of top predators, you probably don't think of dragonflies — but you should! Dragonflies have a 95% success rate when it comes to catching their prey. Compare that to 25% for lions or 50% for sharks, and you'll have a new respect for these small hunters.

Without Dragonflies, You'd Be Overrun With Mosquitoes

If you're seeing fewer mosquitoes around than you normally do, thank a dragonfly! Dragonflies can eat up to 100 mosquitoes a day, which helps freshwater ecosystems flourish. It also keeps mosquitoes from spreading dangerous diseases to humans.

Dragonflies Are Prey to Most Pond Animals

While dragonflies are incredible hunters, there's always a bigger fish. Pond animals such as fish, swallows, frogs, turtles, spiders, and even larger dragonflies are their predators. The bigger a dragonfly gets, the harder it is to catch, so dragonflies' hunting skills are even more important as they grow.

Dragonflies are just one type of insect that migrates with the changing seasons. But the way that dragonflies migrate makes them an exception in this group.

Some Dragonflies Migrate in Swarms

If you've ever seen a swarm of dragonflies zoom past you, you've seen a rare sight: a migratory dragonfly swarm. Some of these swarms can be so large that they show up on radar equipment. Dragonflies, which are sensitive to weather changes, sometimes move together in this way to seek a warmer climate for the winter.

Other Dragonfly Migrations Are Nearly Invisible

Dragonfly swarms are rare because many species migrate independently, making their migration appear invisible. Remarkably, these single travelers fly along the paths of their ancestors without any guidance or companionship to lead the way. Some scientists attribute this behavior to yearly weather changes and the waning daylight on an autumn day.

One Type of Dragonfly Migrates Up to 11,000 Miles

The globe skimmer dragonfly holds the record for the world's longest nonstop migration. True to its name, the globe skimmer is known to cross oceans during migratory seasons and can be found virtually anywhere on the planet. It has an exceptionally short development time for a dragonfly, allowing adults to mature and begin migrating quickly.

From their astounding anatomy to their enterprising ecosystem, dragonflies are fascinating creatures. See what else there is to know about these hovering beauties.

Dragonflies Cool Themselves Down By Doing Headstands

Like all insects, dragonflies are cold-blooded, which means they can't regulate their own body temperature (or thermoregulate). They keep themselves cool on a hot day by standing in a headstand, or "obelisk position." This reduces the amount of surface area on their body that is exposed to sunlight.

'Oding' Is Birdwatching for Dragonflies

Dragonfly enthusiasts can spend hours watching these colorful insects dive through the air. The hobby is known as oding (from the dragonfly's order Odonata) and is similar to birdwatching. Unlike birds, however, dragonflies are constantly active and hunting, so you might have a more eventful afternoon watching them!

Dragonflies Are a Delicacy in Indonesia

Many cultures around the world include insects as part of their diet. In Indonesia, dragonflies are served boiled or fried. They're considered a delicacy and can taste similar to soft-shell crab.

Engineers Use Dragonflies for Design Inspiration

Engineers have long admired dragonflies for their unique aerodynamic design. Dragonflies are also noteworthy models due to their ability to focus on one object at a time. Some engineering projects use dragonflies to model their own inventions and robots.

So where can you find dragonflies? Chances are, if the weather is warm and there's freshwater nearby, dragonflies aren't too far away. Thanks to their contribution to pond ecosystems and ability to migrate long distances, dragonflies can be found on every continent except for Antarctica.

Dragonflies are just one of the incredible creatures found on our planet. Like other arthropods, these insects play an important part in maintaining an ecological balance. Now that you're up to speed on these fast-flying critters, learn more about different types of insects with bug facts that seem like sci-fi.